Tag for I Love Austen Week! 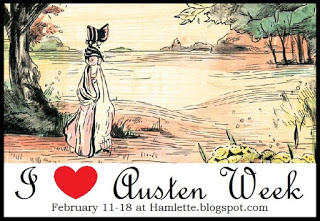 My tag answers for Hamlette's I ❤ Austen Week:

1. Which did you experience first, a Jane Austen book or a movie based on one? ~ Movie/s. When I was about seven my mother started checking out all the available Austen films from our library and (needless to say) they created an indelible impression. ;) 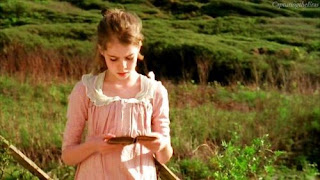 2. What is your favorite Austen book? ~ Well, P&P simply IS P&P (and thus has to be near the top of the list), and Persuasion and Mansfield Park are a pretty close tie, but currently I’d say Emma. (And yes, you will notice I'm very indecisive with some of these answers. It's because they're pretty much all in my Top Twenty Favorite Books of All Time, making this just a little difficult.) 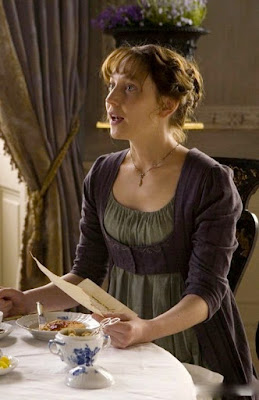 3. Favorite heroine? Why do you like her best? ~ I can closely identify with (and would love to be good friends with) Anne Elliott, Fanny, and Elinor. Though, to tip the balance, I also really like Lizzy and Emma. 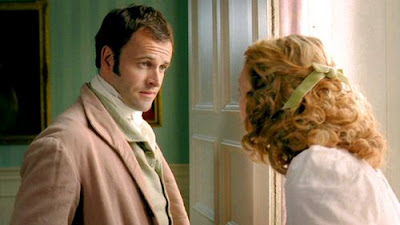 4. Favorite hero? Why do you like him best? ~ Mr. Knightley. (Need I expound further?) Mr. Darcy and Captain Wentworth are close runner-ups. 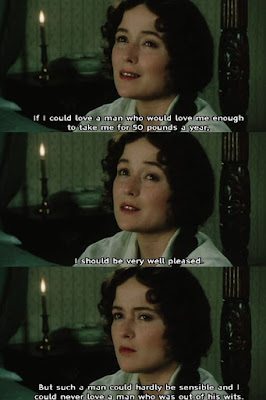 
6. Have your Austen tastes changed over the years? (Did you start out liking one story best, but now like another better? Did you think she was boring at first, then changed your mind? Etc.) ~ Emma was the first Austen I ever tried to read; and tried… and tried… and tried again. I finally made my way all the way through it, have read it maybe 3(?) times in its entirety to date, and now... (see #2). In other news, I've loved P&P, Persuasion and Mansfield Park since the first time I picked them up. 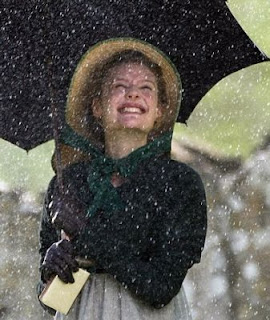 7. Do you have any cool Austen-themed things (mugs, t-shirts, etc)? (Feel free to share photos if you want.) ~ I own an Austen cookbook and I also recently received a lovely Austen print from a good friend and also a Perfectly Splendiferous seafoam green covered-in-JA-quotes print apron (from the same friend ;)). 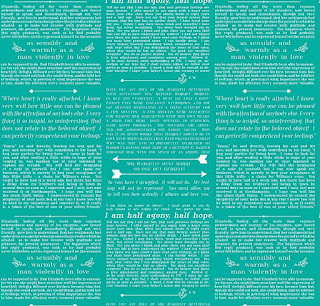 8. If you could ask Jane Austen one question, what would you ask her? ~ I’d like to know if she was ever in love. There are all sorts of historic rumors floating about (and I’ve read some of the authentic sources such as published family letters), but I’d like to hear her own story. 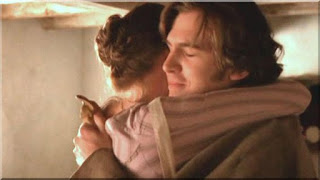 9. Imagine someone is making a new film of any Jane Austen story you choose, and you get to cast the leads. What story do you want filmed, and who would you choose to act in it? ~ There are already so many excellent adaptations, it’s hard to picture them improved upon, but I’ll say Mansfield Park. I haven’t seen the newer versions, but I enjoy the 80’s BBC. If there was going to be a newer one I think Lily James would make a perfect Fanny and… oh, I don’t know, let’s just say Richard Madden as Edmund. (Okay, never mind. Someone needs to make this. ;D) 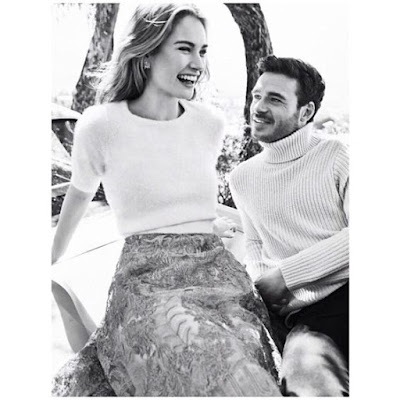 “Oh! how heartily did she grieve over every ungracious sensation she had ever encouraged, every saucy speech she had ever directed towards him. For herself she was humbled, but she was proud of him. Proud that in a cause of compassion and honour, he had been able to get the better of himself. She read over her aunt’s commendation of him again and again. It was hardly enough; but it pleased her.” Pride & Prejudice 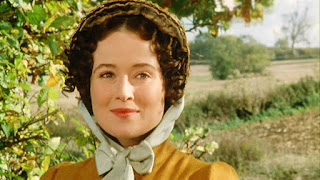 “Here had been grievous mismanagement; but, bad as it was, he gradually grew to feel that it had not been the most direful mistake in his plan of education. Something must have been wanting within, or time would have worn away much of its ill effect. He feared that principle, active principle, had been wanting, that they had never been properly taught to govern their inclinations and tempers, by that sense of duty which can alone suffice. They had been instructed theoretically in their religion, but never required to bring it into daily practice.” Mansfield Park 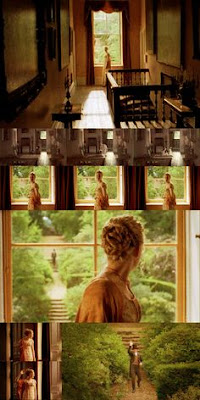 “I can listen no longer in silence. I must speak to you by such means as are within my reach. You pierce my soul. I am half agony, half hope. Tell me not that I am too late, that such precious feelings are gone for ever. I offer myself to you again with a heart even more your own, than when you almost broke it eight years and a half ago. Dare not say that man forgets sooner than woman, that his love has an earlier death. I have loved none but you. Unjust I may have been, weak and resentful I have been, but never inconstant You alone have brought me to Bath. For you alone I think and plan.—Have you not seen this? Can you fail to have understood my wishes?—I had not waited even these ten days, could I have read your feelings, as I think you must have penetrated mine. I can hardly write. I am every instant hearing something which overpowers me. You sink your voice, but I can distinguish the tones of that voice, when they would be lost on others.—Too good, too excellent creature! You do us justice indeed. You do believe that there is true attachment and constancy among men. Believe it to be most fervent, most undeviating in
“F.W.” Persuasion 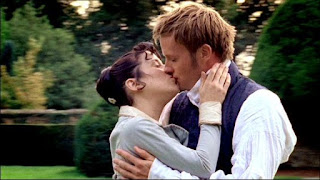 “I do not understand what you mean by ‘success;’ ” said Mr. Knightley. “Success supposes endeavor… But if, which I rather imagine, your making the match, as you call it, means only your planning it, your saying to yourself one idle day, ‘I think it would be a very good thing for Miss Taylor if Mr. Weston were to marry her,’ and saying it again to yourself every now and then afterwards,--why do you talk of success? where is your merit?—what are you proud of?—you made a lucky guess; and that is all that can be said.” Emma 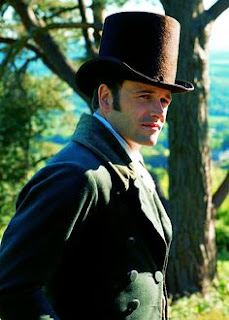 “No,” —he calmly replied,—“there is but one married woman in the world whom I can allow to invite what guests she pleases to Donwell, and that one is—”
“—Mrs. Weston, I suppose,” interrupted Mrs. Elton, rather mortified.
“No—Mrs. Knightley;—and, till she is in being, I will manage such matters myself.” Emma

I'd love to hear if we have any answers in common and be sure to visit Hamlette's post here to join in the party!

Christian || Wife & Mama || Story Lover
So glad you stopped by -- stay and visit a while! 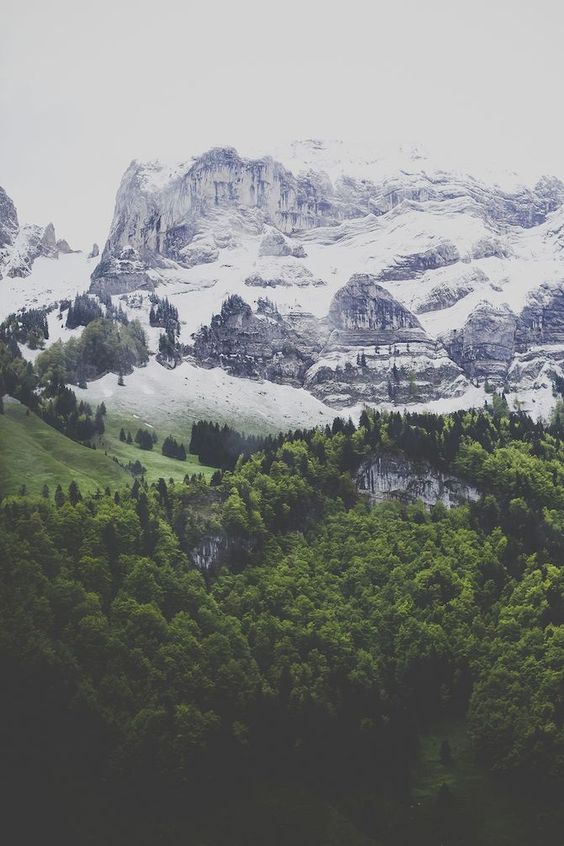 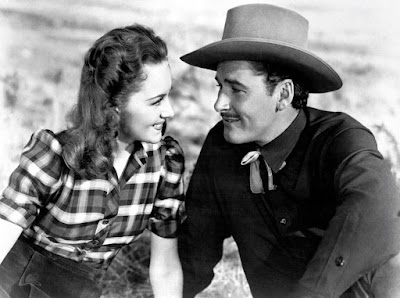